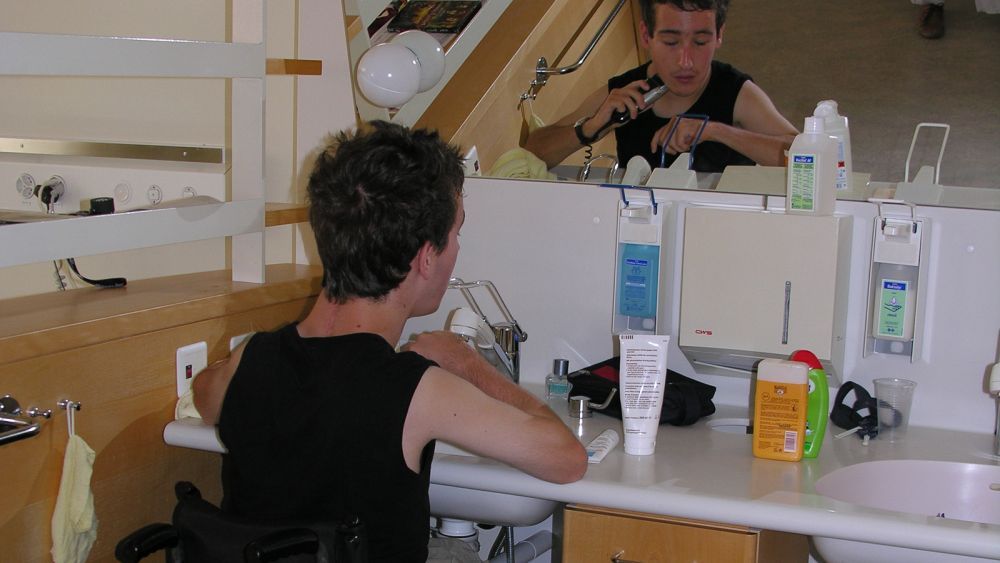 Based on the results of the assessment conducted by the rehabilitation team as well as Stefan's own statements about his functioning, intervention targets and concrete goals to achieve during Stefan's participation in the three-week rehabilitation programme were identified.

In consideration of the assessment results and Stefan's expressed view about his functioning and independence in daily life, Stefan and the rehabilitation team identified three goals. They identified ‘increased independence in daily routine’ as a service-program goal, the goal to achieve at the end of the rehabilitation programme. As small steps toward achieving the service-program goal, they identified ‘improved mobility’ and ‘increased independence in self-care’ as two cycle goals. Implicit in these goals is the efficient use of available time in performing daily activities.

"Implicit in these goals is the efficient use of available time in performing daily activities."

These three goals were documented on Stefan's ICF Categorical Profile, a visual depiction (bar graph) of his functioning status at the time of assessment. The bar graph reflects the ICF qualifier 1 rating given for each of the ICF categories and personal factors identified during the assessment. To compare Stefan's functioning at the initial assessment with his functioning at the end of the rehabilitation programme, ICF qualifiers were also used to indicate the goal value i.e. the rating that was intended to be reached at the end of the rehabilitation programme. See table 2.

Table 2. ICF Categorical Profile; ICF Qualifier: rate the extent of problems (0 = no problem to 4 = complete problem) in the components of body functions (b), body structures (s), activities and participation (d) and the extent of positive (+) or negative impact of environmental (e) and personal factors (pf); Goal Relation: 1 and 2 refer to Cycle goal 1 and 2; SP refers to Service-Program Goal; Goal value refers to the ICF qualifier to achieve after an intervention.

As intervention targets to address cycle goal 1 ‘improved mobility’, Stefan and the rehabilitation team included body functions, for example b710 Mobility of joint functions and b730 Muscle power functions, as well as a range of activities and participation categories such as d410 Changing basic body positions and d470 Using transportation. Another example of an intervention target for cycle goal 1 ‘improved mobility’ is d420 Transferring oneself. Transferring is one aspect of functioning that Stefan highlighted during the initial assessment as especially problematic, requiring regular assistance from a helper (predominately from his mother). For this intervention target Stefan and the rehabilitation team set a goal value of ‘2’ (moderate difficulty) from a starting point of ‘3’ (severe difficulty).