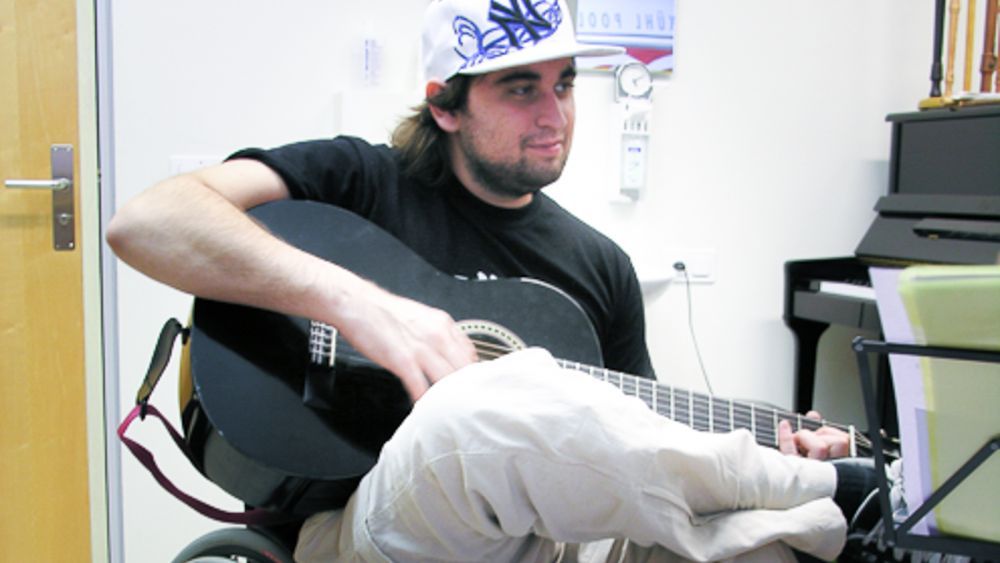 Marco's story differs from those of many other persons with a spinal cord disorder (SCD). While not unique, it is an unusual case.

At the time the case study was conducted, Marco was 23 years old, and had worked for some years as an electronic technician. One winter he took four months off from his full-time job to travel in India and Thailand. The trip was exciting and proceeded without incident. Marco returned feeling invigorated and ready to resume his job.

About four weeks after his return, Marco came down with a sudden fever along with headaches and angina. Without a specific diagnosis Marco was treated with antibiotics, and the symptoms improved immediately. Another month passed, and a new and strange symptom arose – a twitching and feeling of “pulling” at Marco’s left heel. He tried to disregard it for a number of days, and went about his work and life. However, the odd feeling began to expand to pain in his leg, travelling slowly and steadily up his calf. One week later, Marco started to have back pain that extended up to the thoracic area of the spinal cord (mid-back and upper torso). At this point he admitted himself to a nearby hospital. Whatever he had, it was serious and was worsening.

"The odd feeling began to expand to pain in his leg, travelling slowly and steadily up his calf."

Upon admission to the hospital the doctors found extensive oedema around the thoracic spinal cord, and began treating him with high-dose steroids. Marco’s condition nevertheless deteriorated, and one day later progressed to paraplegia with American Spinal Injury Association (ASIA) Impairment Scale grade A at the level of T10. This meant that he had loss of sensory and motor functions below the mid-back and abdomen. Marco also developed an inability to empty his bowel and bladder. Additionally, the vision in his left eye began to blur due to an inflammation of the pigmented layer of the eye (uveitis) and retina (retinitis).

At the first hospital I had difficulty understanding or accepting my health condition because of the lack of a clear diagnosis. I didn’t know what to expect, and it was very unpleasant having so much uncertainty.

Tests of the serum and other bodily fluids, including for a range of viral and bacterial infections, were negative. While the doctors made no clear diagnosis, they suspected that Marco had developed Behçet’s syndrome, although he had not met the strict criteria for a clear diagnosis of Behçet's syndrome. See box 2.

Named after the Turkish dermatologist who first described the condition, Hulusi Behçet, Behçet’s syndrome (or Behçet’s disease) is a recurring, inflammatory disease of unknown aetiology (or cause) that affects multiple body systems. The body systems affected may include the eyes, skin, mucous membranes, joints, the gastrointestinal system, the central nervous system, blood vessels and lungs.111213

Behçet's syndrome is uncommon in Europe and North America; it is more prevalent in the region stretching from the Middle East to Far East Asia.1112

Diagnosing Behçet's syndrome is difficult since there are no specific diagnostic tests or findings of tissue or cell examinations that provide evidence for the disease.1112 The diagnosis of Behçet’s syndrome is based on a combination of symptoms following a set of diagnosis criteria; this set of criteria has changed several times since 1946. The most recent set of criteria, the International Criteria for Behçet's Disease (ICBD),1113 follows a point system. According to the ICBD the presence of the following symptoms receives a certain number of points:

In addition to this set of criteria, other symptoms are often present, including gastrointestinal ulcers usually involving the colon, and joint pain and inflammation.111213

There is presently no cure for Behçet’s syndrome, and treatment options generally focus on alleviating symptoms through medication (anti-inflammatory and immunosuppressant drugs).1112

The steroid treatment continued, and Marco showed some improvement – the oedema decreased, some sensitivity was restored, and his overall condition was somewhat better, though still far from normal. However, three weeks later, Marco still had no control over his urination nor bowel movements, requiring catheterisation, colon massage and manual evacuation of the bowel. It was at this point that Marco was transferred to a specialised rehabilitation centre for spinal cord injury (SCI) and spinal cord diseases (SCD) for further medical management and rehabilitation.

At the rehabilitation centre the initial urinary (urethral) catheter was changed into a suprapubic catheter that enters the bladder through the abdomen.

I really couldn’t stand the urinary catheter. It was painful when putting it in, and then it felt like some foreign object inside of me. It was really unpleasant. The suprapubic catheter was even worse. I felt like I had a hole in my stomach, and couldn’t bear to look at it.

Although the cause of Marco's condition was still not 100% clear, efforts were made to foster Marco's independence, increase his mobility, and improve his self-care skills. However, his prognosis was far from certain. Despite these efforts, the prognosis – when and to what degree Marco would regain functioning – was unclear.

After six weeks of suprapubic catheterisation, Marco developed a detrusor sphincter dyssynergia i.e. impaired coordination between bladder contraction and sphincter relaxation,1 requiring a new intervention to manage his urination. A condom catheter4 was fitted to passively collect urine as needed.

In the first two months at the rehabilitation centre, Marco regained muscle power in his legs and trunk. Consequently he recovered some ability to move his legs, and was able to eat without resting or holding onto a table or chair for support. He also made great improvements in manoeuvring the wheelchair. Approximately two months following the onset of the disease, the rehabilitation team decided to conduct a comprehensive assessment of Marco's functioning as the basis for the next phase of rehabilitation.