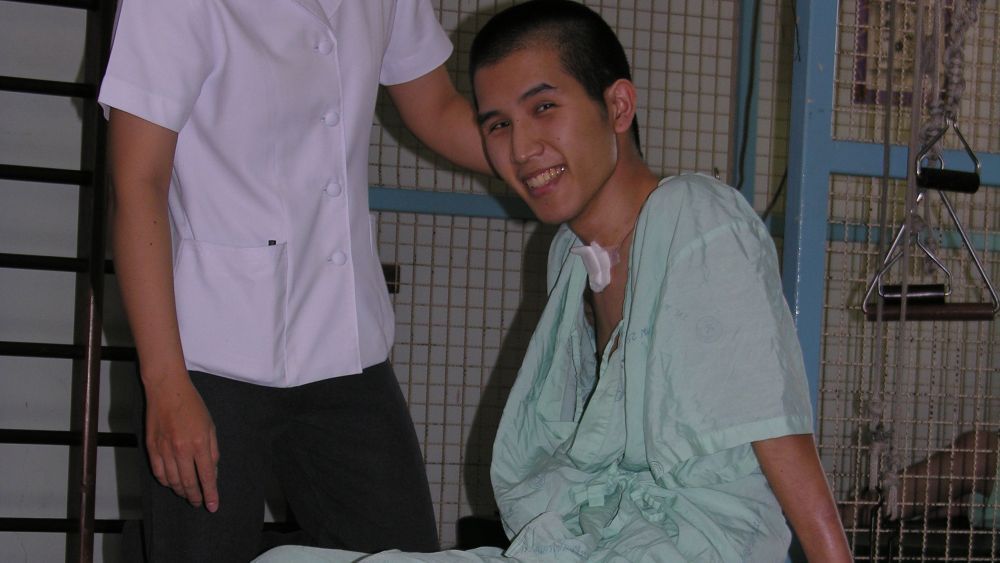 Mr. Wun fell asleep while driving without a safey belt, resulting in a serious motor vehicle accident and a spinal cord injury (SCI).

Twenty-two years old at the time of the accident, Mr. Wun underwent emergency surgery to stabilise his spine. Afterwards he was diagnosed with C6 tetraplegia with an American Spinal Injury Association (ASIA) Impairment Scale grade A. This meant that Mr. Wun had paralysis in the hands, trunk and legs with no motor or sensory functioning from the hip and below. Mr. Wun remained in the intensive care unit (ICU) for four months, where the medical interventions focused on healing the impairments in his body structures and in improving his body functions. To assist him with respiration after the surgery, a temporary tube was placed through his neck into his trachea (called a “tracheostomy tube”). Unfortunately, this caused difficulties in swallowing (“dysphagia”). Consequently, a second tube (known as a “percutaneous endoscopic gastrostomy tube” or “PEG tube”) was placed directly in his stomach for feeding; this minimised his need to swallow.

In Thailand, families of persons with SCI are generally expected to take over much of the person's care soon after his or her condition is stabilised. Thus, Mr. Wun was discharged from the ICU and was brought to his mother’s home, where she, a trained nurse, took responsibility for his care and rehabilitation with the assistance of two household servants. Mr. Wun's mother and the housekeepers adapted the house and the surrounding area for wheelchair access.

A physical therapist (PT) treated Mr. Wun three times a week and oversaw the majority of his treatment in the eight months following his return home. During this period, Mr. Wun faced many challenges including poor upper and lower extremity functioning, bladder and bowel incontinence, respiratory impairments, and severe limitations in mobility. Additionally, the fistula (an abnormal tube-like connection between parts of the body) that remained after the removal of his tracheostomy tube led to difficulties in both speaking and eating.

Mr. Wun quickly discovered that one of the greatest difficulties that impacted his quality of life was a lack of accessibility. While his family’s financial resources were sufficient to enable major adaptations in both the indoor and outdoor areas of the Wun family property (e.g. installing ramps and making rooms and the bathroom facilities accessible), the world beyond Mr. Wun's home remained out of reach. His wheelchair was heavy and cumbersome, and manoeuvring it outdoors or about town was extremely difficult. High steps, unpaved sidewalks and roads, and inaccessible public transportation are environmental barriers that Mr. Wun had not been able to overcome. Even if transported directly to public areas, it did not take long to find new barriers. For example, wheelchair-accessible public toilets were a rarity.

Moving around inside the house is no problem. But I am inside 24 hours a day. My biggest problem is...not being able to get around beyond our property.

One year following his SCI, Mr. Wun was admitted for the first time to a nearby hospital’s rehabilitation unit. Here he received a routine evaluation, additional care and follow-up rehabilitation. Mr. Wun remained in the unit for one month of intensive therapy and rehabilitation that included a number of interventions to treat and/or prevent secondary conditions, swallowing training, instalment of a new tracheostomy tube, regular suctioning of secretion in the air passage and treating his “ineffective cough”, bladder management, self-care, and mobility training. Having made some minor improvements, Mr. Wun returned home. Four weeks later an unsuccessful attempt was made to close the wound left by the tracheostomy tube that was not healing on its own.

Sixteen months after his injury, Mr. Wun was re-admitted to the rehabilitation unit of the local hospital to further address his tracheostomy incision, ongoing spasticity and bladder problems, and his continued dependency on others for self-care and mobility.